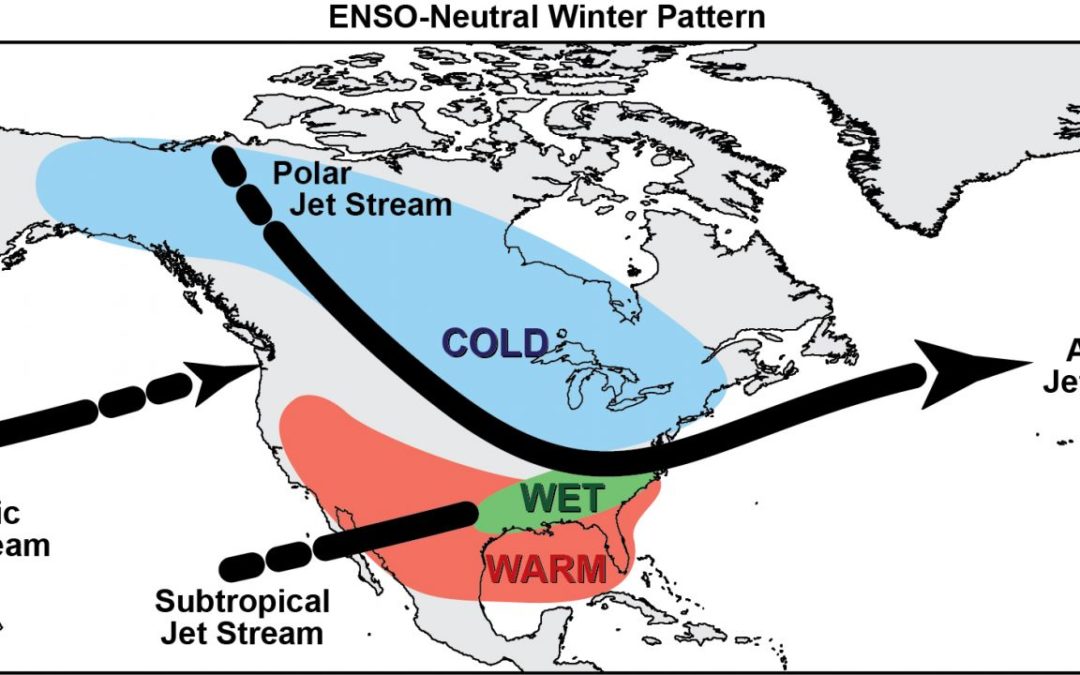 Snow-capped trees, plows on the road, and rolling white fields were some of the sights to be seen the first few days of December in Massachusetts. With the return of students from Thanksgiving break brought the first winter storm of the season to New England. Such an early start to our winter has led many to wonder what the rest of the season has in store for us.

The current winter outlook calls for a similar winter to the “Snowpocalypse” winter of 2014-15. That year, the winter weather pattern started with a jet stream trough in the western half of the United States and a ridge in the east. This led to relatively warm temperatures on the east coast with practically no snowfall accumulation through December and January. While the east half enjoyed a “tropical” Christmas, the Rockies and Midwest were pummeled with winter storm after winter storm and were on track for a record snowfall year. However, at the end of January, that all changed and the pattern flipped. The Northeast broke multiple records for seasonal snowfall that year by getting hit by a major snowstorm almost every week from the end of January through March.

That record-breaking winter season, likely returning this year, was due to multiple atmospheric and oceanic factors that are now (or soon will be) present in our environment. Firstly, the El Niño or La Niña of 2019 ended officially in August. These are names given to a series of climate changes that cause sea-surface temperatures around the eastern Pacific to become either abnormally warm or abnormally cold. While seemingly inconsequential to our weather, thousands of miles away, the presence of these abnormalities influences the meteorological patterns of the United States by quite a bit. The lack of either of these, known as an ENSO-Neutral pattern, will be present at least until spring, which will cause the eastern United States to remain cooler than average while warmer weather will take hold in the west. Another factor impacting our winter season is the infamously named area of warmer-than-average sea-surface temperatures in the northeastern Pacific: The blob. The blob causes a huge ridge in the jet stream to form over Alaska. This ridge inversely causes the jet stream to dip from the midwest to the east coast. Quite possibly the most important factor that led to the previous record-breaking year, this trough in the midwest causes the jet stream to act as a funnel for winter storms to travel up the east coast and hit New England.

If all of these factors come into play as forecasted, the Northeast could be looking at another record-breaking winter.

Author’s note: The science of meteorology can be quite complicated and is extremely hard to do so error-free. Modern innovation has brought us more accurate forecasts each year, but even now it is hard to do so precisely for more than about five days. Long-range forecasts can give us an idea of the weather to come months or even a year in advance, but they should be taken with a grain of salt. Meteorological conditions, especially snowstorms, are extremely circumstantial. Even if all of these atmospheric factors combine for the “perfect winter setup”, it is still quite possible that these winter conditions as described never materialize. So while this prediction can give you insight on the weather to come, I urge readers to not take it as fact and pay attention to their local forecasts as winter arrives.