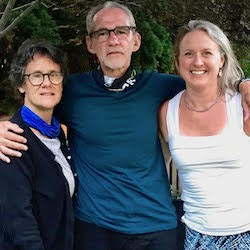 Wrongful Conviction Day, which officially falls on October 2nd, is a day dedicated to people who have been sentenced to time in prison for crimes that they did not commit. Innocence organizations established this day to share anecdotes and educate people that wrongful convictions are not rare – they happen at an astounding rate in courts across the country and around the world. Through diving into different cases and learning about the causes of these incorrect convictions, more and more is revealed about the ways that the criminal justice system in the United States has failed so many, and has led to lasting impacts on individuals, their families, and their communities.

CA’s Prison Justice Project Club, formally known as the Innocence Project, has hosted Wrongful Conviction Day workshops over the past couple of years and invited exonerees to campus to speak about their experience as victims of the criminal justice system. Last October, Omar Ortiz, who was incarcerated for twenty years, and his lawyer, Chauncy Wood, shared his story, along with the hidden realities of prisons in the United States. This year, CA was thrilled to welcome Ray Champagne, along with his lawyer, Lisa Kavanaugh, to share a first-hand perspective of simultaneously living and being an activist in prison when wrongfully convicted.

At 9 pm on November 15th, 1978, an inmate named Stephan Curvin was stabbed, and left dead on tier B-1 of Walpole Prison. Champagne, already an inmate at the prison, was accused and eventually sentenced to life in prison without parole due to first-degree murder. Despite the lack of physical evidence connecting him to the crime, Champagne was convicted due to two inmates who, Kavanaugh describes, “had everything to gain and nothing to lose by blaming him for participating in this crime”. The Supreme Judicial Court, the highest appellate court in Massachusetts, reviewed the lack of evidence, and even noted that the testimony against Champagne was “extraordinarily thin” and that the decision to convict was based on “the credibility of witnesses who were highly questionable”. Champagne persisted to gain access to more evidence in order to alter his sentence, but all of his inquiries were denied.

As a result, Champagne spent over forty years in prison for a crime that he did not commit and has served more than anyone else on the National Registry of Exonerations. Champagne spoke about the way that he eventually lost the feeling that he was innocent, and was forced to conform to the violent, toxic environment. He stated, “When you live in the environment, it is just the antithesis of society. There is no society, nothing like the outside world. It is a world unto itself. It’s an ugly place and damages everyone who touches it.”  He later recalled how “you don’t live in prison, you just exist,” and the dehumanizing ways he was treated.

Throughout his sentence, Champagne learned more about the ways that prison forces one into a bitter, violent mindset that is difficult to escape because it’s the norm, and one of the only ways to truly survive. He said every morning he woke up and thought, “ I could kill or be killed today,” and after years behind bars, his only option left was to subconsciously adhere to the prison’s expectations and culture.

One morning, after getting into a fight, Champagne realized that this philosophy didn’t have to be the answer for him. By educating himself in law practices, he attempted to retaliate against the system that had wrongfully held him for 45 years. Prison guards did not respond well and ended up putting him in isolation for actions that he simply did not do, such as organizing riots and being ‘a management problem’. He even was placed in isolation because he had a pillow, not even an extra one, that the prison guards did not record. Because he had stopped using violence, he had a stronger case when fighting against many of the claims that prison guards made. He began winning those cases. Not only did this impact him and his experience in prison, but it provided a model for others in prison that they could fight against a system “designed to further incarcerate”.

In October of 2019, Champagne’s case was brought up again due to a confession from an inmate that “the one individual who stabbed Curvin was not Ray Champagne.” At the trial, Kavanaugh stated, “For forty-one years, Ray Champagne has steadfastly manifested that he had no role whatsoever in the stabbing death of Stephen Curvin. Every new piece of evidence come to light since his trial supports this position and shows that justice was not done.” By February 18th, 2020, the prosecution dismissed the charge, and Champagne was freed.

Champagne spoke about the ways it was difficult to reenter society because it seemed like a whole different world. But, he also notes how COVID-19 and the state’s lockdown made it easier to go out into public. He was so used to being by himself that big groups scared him, and “still terrifies [him] to this day,” but during the state-wide lockdown, he had an easier transition.

Today, he hopes that more attention is brought to the criminal justice system and that people of all ages dedicate time to understand the stories of those behind bars, whether they are wrongfully convicted or not. If this is a topic that interests you, please consider joining the Prison Justice Project where we take a deeper look into many of the topics that Ray Champagne spoke about!