A Beginner’s Review of From the Neck Up: An Illustrated Guide to Hatmaking 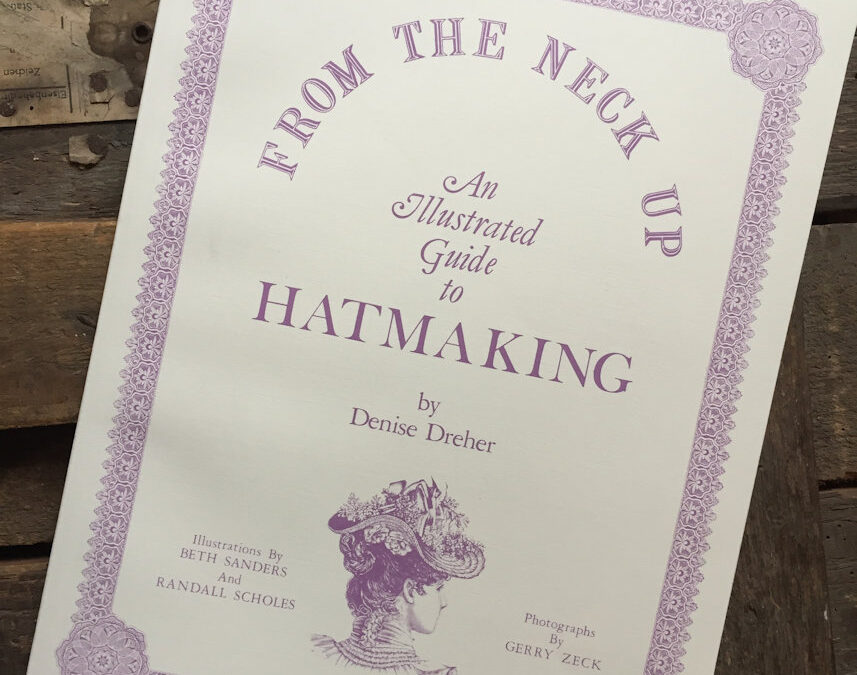 One rarely finds a book review of a reference book. The review industry holds a stigma against them, as the modern conception of “reference book” has been pervaded by the dread of classrooms: textbooks. Though I hold no love for textbooks, finding them brash and often miscommunicative, I feel regret that the term, which in being so pervasive perhaps ought by now to be instead accepted and rendered neutral, has led many to forfeit exploring texts like Denise Dreher’s From the Neck Up: An Illustrated Guide to Hatmaking. For, even if most persons have none of and will not procure the materials Dreher recommends as a hatmaking starter kit, Dreher’s “millinery Bible” is an astounding leisure read. (Millinery is the industry-accepted term for hat making. I use them interchangeably)

Dreher published the original From the Neck Up under the seller name, “Madhatter Press,” in 1981. Subsequent editions have remained largely unchanged. Dreher begins, “A hat is an extremely powerful image-maker.” Image, however, is fixed. The book mostly follows the Western millinery tradition—that is, the book works with a geographic understanding of periods, intended perhaps for a British-American audience.

From the Neck Up is divided into seventeen sections: a Preface; a walkthrough of Composition and Design, Materials and Equipment, multitudes of Techniques; a 10-page glossary; and a Pattern collection, the last of which is by far the most basic. Included in the Pattern section are some ancient, classical, and gothic references before the labels fall in by century. Still, they are gathered towards the back and scaled down for a reason; the bulk of the book’s valuable content lies before.

Dreher’s language is elegant, occasionally archaic to the modern ear, yet nevertheless precise and extremely efficient. As a historian, Dreher manages to capture what many website blogs seem to lack: scope. The use of each resource is best regulated to what it is best at. In this case, Dreher’s research seems meticulous, and backed and dilated by years of professional experience. If one is genuinely interested in a beginner hat making project, there are a plethora of hobbyists online. The charm of From the Neck Up seems to be that it accidentally unearths certain tricks of the trade in alignment with “antiquated” values that were, in fact, passed on over time: the preserving and reusing of material, an eye for detail, and the context for each step and each garment baked into the instructions. The illustrations, mostly black and white or inked drawings, are too sparse to be novice-friendly but altogether visually cohesive.

Over the past couple of decades, the growing internet community of milliners have rallied behind this book. Oddly however, Western millinery today has become almost a lost art. Even as Dreher laments that resources for learning millinery are thinning by the day, many brick-and-mortar addresses filling pages upon pages of the book no longer lead to their promised resources. The idea is doubtful that this one book may have rescued millinery. So for the most part, the threshold for entry and the relivening of millinery might not have been lowered by one milliner’s guidance, but at least it has been made more visible.