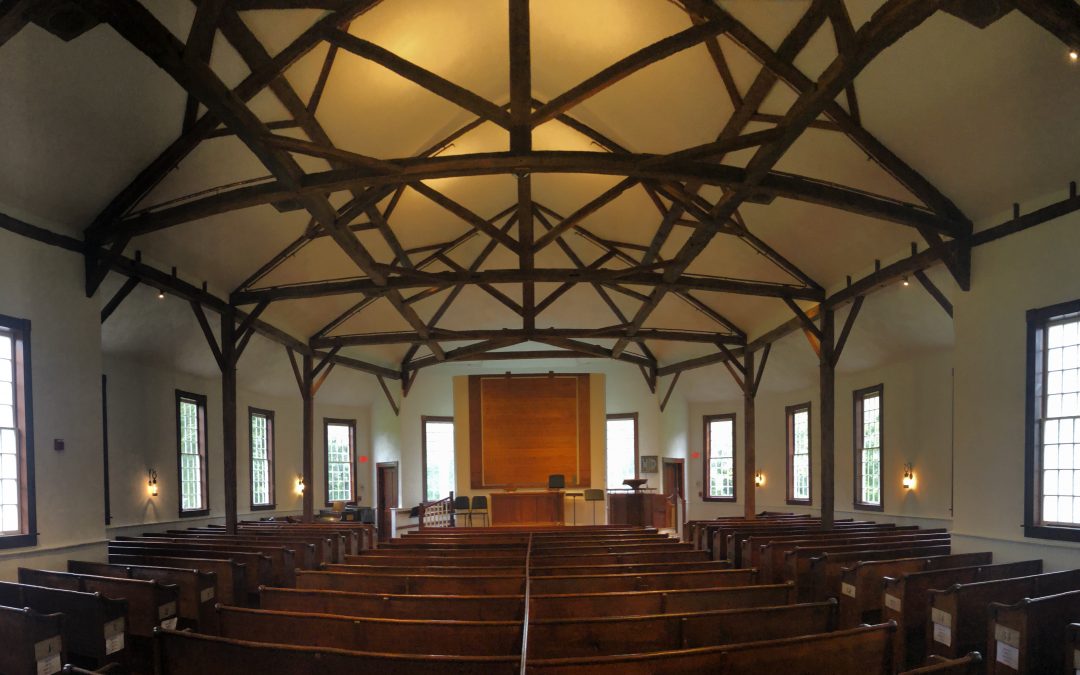 Prior to the pandemic, the chapel experience at Concord Academy was possibly one of the most important school traditions. Students would spend their entire CA careers looking forward to theirs and their friends, and would spend three days a week being inspired by the words of their peers on the benches of the Elizabeth B. Hall Chapel.

However, once the pandemic hit, chapels changed and would remain that way for the rest of 2020 and 2021. When CA first went remote, students were forced to film their chapels from their homes, or in their cars, as one student did. Although they became very creative with their presentations, it is without a doubt that the experience was not the same as a “normal” chapel would have been.

As students slowly began to return to campus more and more frequently, they had the opportunity to pre-record their chapels on campus, and students would then watch them in different locations with their grade. Now, in STAC 5, the situation hasn’t changed much: although some seniors can give their chapels in person now, some still have chosen to pre-record theirs. Different grades continue to watch them in separate locations.

The experience is almost identical to how it was in the pilot and STAC 4, with only one major change: the underclassmen being relocated to watching chapels in the tents. The two tents, located on the Quad, have been an amazing addition to CA this year. They have allowed students to eat in a heated area when needed, and now, watch chapels with the rest of their grade. However, I wouldn’t say that watching chapels in the tents has been all that wonderful.

As a sophomore, I had about seven months to experience “traditional” chapels last year, and they were an engagement that I looked forward to every morning. Unfortunately, this year, chapels have felt very different. When we were entirely remote, I would find myself watching chapel on my bed between classes, which certainly did not feel the same as sitting on the benches. As a result, when I heard that we would be coming back to CA, the prospect that chapels would feel more like the old ones made me ecstatic.

Up until STAC 5, in-person sophomores had enjoyed the chapels in the Upper Stu Fac classroom or the Great Room. Although being in these rooms was clearly nothing like being in the Chapel with the rest of the community, it was a step up from watching it on a small phone or computer screen, isolated in your house. Even though we were divided by grade, my class was still split into multiple locations, emphasizing the lack of community we felt during  a community-oriented tradition at our school.

In STAC 5, freshman and sophomores have been relocated to the tents, one grade in each, and we all have the opportunity to watch as a grade on a projector. While this sounds like an improvement from before, it has actually been a  downgrade in many ways. With speaker malfunctions, projector issues, and the tent swaying and rattling on windy days, there have been many cases where it has been difficult to hear the chapels—if students can hear them at all.

There have been days in which I have left certain chapels realizing that I could not hear a word a student had just said, or we have sat in silence as we wait for the technology problems to be sorted out—missing the beginning of what someone had to say.

While it has been nice getting to be with everyone in the grade at once, it makes me wonder if there could be a better way to do this. Even with the current set-up, I can’t be engaged in the main community event, or the community as a whole, if I can’t hear a thing. In a way, I feel even more isolated from the rest of the community than before.

All of this raises many questions: What would be better, if anything? Would it be better to divide up inside like we were before, or would students benefit instead by watching chapels outside on their phones, like during the pilot? It seems clear that given the pandemic, there is no way to have chapels feel anywhere close to how they were before, which is no one’s fault. However, being in the tents has certainly been more problematic than expected.

Photo courtesy of Sonny Tang ’22 | Photo Editor at The Centipede