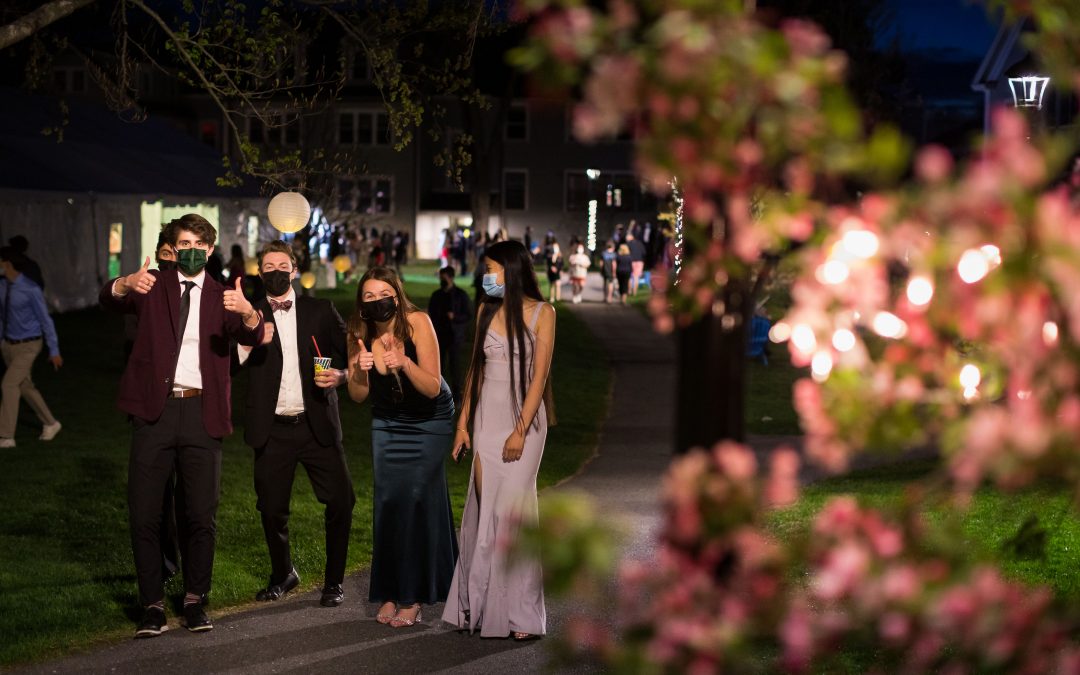 Formal 2021 was hosted May 1st on CA campus. Students arrived between 6:15 and 7:15 pm with friends and dates. There were many activities offered including photos, games, food, and dancing. Most wore dresses and suits and ties. Underclassmen and juniors wore cocktail dresses whereas seniors wore floor length dresses.

Before Formal activities began on the quad, there was an opportunity to have photos taken by professional photographers. Seniors went to the Moriarty Athletic Campus to take group pictures and individual portraits, while freshmen, sophomores, and juniors were gathered on the MSL Patio, Stu-Fac Patio, and Chapel Lawn respectively to get their pictures taken. Professional photographers walked around and snapped pictures of student groups socializing together. These photos were later available in May 7th’s Community Newsletter.

As students began to migrate towards the tents located on the Quad, they found green screen photography in Tent 2! Many gathered to take pictures with their friends and then choose a background of a red carpet, tropical oasis, or shark attack scene. This area was a great way to record a memory and get a nice souvenir from the night. Sophia Hernandez ‘24 said, “The photo booth was one of the highlights of formal. It was so fun huddling up with all my friends taking a big group photo with funny faces… I loved how all the pictures were printed and ready for you in seconds and they were even put in frames!”

In Tent 1, there was a live DJ. Many students moved towards this area to dance with their friends. Popular songs like “Cotton Eye Joe” and songs by artists like Taylor Swift, One Direction, and Ariana Grande were played loudly. Students moved to the beat and yelled out the lyrics to their favorite songs. This space was very well-liked among students, though the tent did have to be cleared out about three quarters of the way through the event as there was not enough space to socially distance. Ben Bartlett ‘24 shared, “It was nice to have a night where the pressure of COVID and the STAC system didn’t exist. The dance floor was a highlight, I was disappointed when it closed though. The energy in the tent was incredible. Overall, an entertaining and stimulating event.”

In the Ransome Room, there were many arcade game offerings. Games including giant Connect 4, foosball, PAC-MAN, giant chess, and car racing were very popular. Many gathered around the foosball table for a competitive tournament, and lots of students played giant chess while spectators looked on. Irene Zheng ‘24 commented, “I didn’t think I’d enjoy formal as much as I did…My friends and I ended up playing foosball all night, and it’s safe to say that we really enjoyed ourselves. We had very competitive games that at times, almost made us fall to the floor out of laughter.”

One of the highlights of the event was the food and snack offerings. Food trucks were serving treats from 7:00 – 9:00 pm. Del’s Frozen Lemonade, Cupcake City, and Shishkaberry’s of New England served various flavors of lemonade, cupcakes, and chocolate-covered treats! Nick Brady ’24 expressed, “Formal was great, and the food made it even better! The food trucks were a great addition to the event.”

In conclusion, Formal was a massive success among students. Though it was different from previous years, it was great to see so many students smiling and having fun. For many, a sense of normalcy was felt at this event. It was also an amazing opportunity for freshmen to understand more about CA culture and what CA was like pre-pandemic. Overall, Formal was an amazing experience that had a lot of engagement and excitement. Memories were made, laughs were shared, and a great time was had by all.